I had the pleasure of interviewing an interpreter at the Whale Interpretive Centre in Telegraph Cove. Meet Gillian Holmes who is spending her fourth summer at the museum.

Can you tell me a little bit about the Whale Interpretive Centre?

What is your favorite part about working at the Whale Interpretive Centre?

I like having the opportunity to talk to people from all over the world to teach them about the fantastic animals that are in the area and to have the chance to teach them something new.

Why is it so important we care about our sea life such as whales?

If we don’t care about the local species we’re not going to do anything to save them. We’re not necessarily going to be as interested in preserving the behaviors we see here or the unique environments. If we care about it we’re going to work to preserve it.

What is your favorite thing to get asked by visitors?

It’s when people come in with either a piece of bone or a photo of something and they don’t know what it is and I like walking them through the identification process. I like involving them in the process rather than just telling them what it is.

If a visitor approached, wondering about the safety procedures when on a boat with whales in the waters around, what would you tell them?

How old is the oldest bone in here? What’s it’s story?

I think the oldest is probably the blue whale jaw bones, those came from the Coal Harbour Whaling Station, closed in 1967, in their 19 years of operation they took over 1000 whales and so these ones were donated to the Centre.

What’s your favorite artifact in the Whale Interpretive Centre?

I really love the Minke skeleton but also the big killer whale skeleton is certainly beautiful, that’s one of our newest specimens. It’s really interesting to compare the size of that one to the younger killer whale we had before.

Can you tell me how we can all be more “whale aware”?

Whats important when you’re out on the water is just keeping a close watch. If you spend some time up here you’ll here the phrase “if you see a blow go slow.” This is really important for the killer whales and dolphins and porpoises that we have around here, they have echolocation so they’re pretty aware of what’s going on around them. The bigger whales like the humpbacks and the minkes are not necessarily so aware without that echolocation, so they may not know a boat is coming towards them. It’s important to be cautious of what’s in the area.

Why do you think whales like being in the Queen Charlotte Strait?

I think it’s a good opportunity to get a lot of food. There’s historically been a lot of salmon here, which is why we see so many of the northern resident killer whales. There’s also a lot of juvenile herring which is good for the humpbacks. It’s just a lot of food in a nutrient rich area, it’s a good ecosystem for them.

Why is underwater noise such a problem for sea life?

While underwater noise doesn’t necessarily directly affect their health, it just adds a lot of stress to their everyday life. For killer whales especially who are really interacting with each other and communicating with each other it adds a damper and how they can communicate. If you’re looking to buy a house you’re not necessarily going to settle in right next to a highway where it’s going to be loud at all hours of the day or search out a construction site. That would add a lot of stress to your life just like underwater noise does to our killer whales.

What else do you think we should know?

If you have the time I highly suggest going out to Telegraph Cove and checking out the Whale Interpretive Centre, be sure to say hi to Gillian!

Check out these photos from the Whale Interpretive Centre:

Port Hardy has many unique and beautiful spots for you to go camping! Camping is an always fun pastime to do by yourself, with your family or with some friends – so go out and go camping! Here are some campgrounds in the Port Hardy area:

Cluxewe is a beautiful resort with campsites, RV sites, and cabins. For RV’s it has full hookups and partial hookups. Each of their twelve cabins come equipped with full kitchen facilities, bathrooms with shower, bedding, towels and satellite television. Cluxewe has it’s own restaurant called the Cluxewe Waterfront Bistro. It is located right on the water between the communities of Port Hardy and Port McNeill.

This campground is located on the banks of the Quatse River, a five minute drive from downtown Port Hardy and a 10 minute drive to the BC Ferries terminal. The campground is part of a richly forested regional park containing trees hundreds of years old, with wild flora and fauna found in old growth forests. There’s a trail right beside it called the Quatse Trail Loop which is 2.5 km. If you’re wanting seclusion, a nice river to swim in and a trail near the campground, Quatse Campground is what you’re looking for! 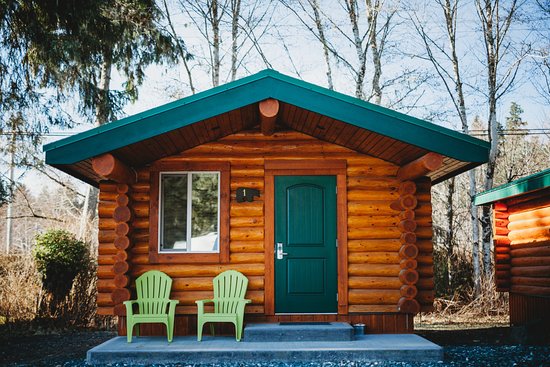 This is a nice place if you have an RV or want to stay in a cabin. The cabins have a kitchen and their own on-suite bathroom. They can fit up to 4 people in one cabin. It’s right off the highway and close to two trail heads, Quatse Trail Loop and the Fort Rupert Commuter Trail. It’s open year round

This campground and RV site has a beautiful view of the ocean. They also have 3 suites available! The RV sites can come with hook ups or partial hookups. All Campsites offer a nice ocean view.

This beautiful spot has over 75 Campsites on the estuary of Hardy Bay. Family owned and operated for over 30 years, it is fully landscaped and has secluded sites just 2kms from the BC Ferries Bear Cove terminal. There is a small dock for up to 20 ft boats and the fishing is great. If you’re looking for seclusion and a hiking trail that leads to one of our favourite beaches, then Wildwoods is right for you!

For more information on places to camp click here

Recently Laura and Seth, who are members of our visitor services team, went to San Josef Bay with Cove Adventure Tours and here is their take on the day. It was AMAZING! The tour starts at 8:30 am when you are picked up in Port Hardy and you are greeted with the smiling faces of your tour guides Chris and Leah.

To get to San Josef Bay you travel on the Holberg road, a gravel active logging road for two hours. After which you will arrive at the San Josef’s Bay trailhead and hike 45 minutes to the beach. While you can take your own vehicle, with Cove Adventure Tours you can relax and arrive ready to enjoy your experience of San Josef Bay.

Chris and Leah have amazing stories of Port Hardy and about the history of the Cape Scott area to make the 2-hour drive seem to go by quickly. In Holberg they make a stop at the Scarlet Ibis Pub enjoy a bit of the history of Holberg.

As we walked to San Josef Bay from the trailhead we stopped to check out the unique growth patterns of some of the trees. The trail to San Josef Bay is super easy and doesn’t even seem like 45 minutes.

San Josef  Bay is breathtaking and you’ll see no other beach like it. With Cove Adventure Tours you travel around the beach and they also supply you lunch! It’s great to feel the sand between your toes and check out the cool tide pools.

On your way back you can either stop at Ronning’s Garden, the Fossil Beds or the Holberg Dock depending on your preferences. Sadly there was a pet boar on the loose so we did not go to Ronning’s Garden.

At around 4:30 you arrive back in Port Hardy having enjoyed an eventful day. The trip in all was super fun and we highly recommend going to San Josef Bay with Cove Adventure Tours, or even on your own.

At the Port Hardy Visitor Centre we believe that the best way to describe an experience is to have the experience.  Thank you to Cove Adventure Tours for making this experience possible.